Two FO Friday posts in a row?! I think it’s fair to say that I’m on a roll, especially because this post contains two FOs. The speediness of hat knitting is one of my favorite things.

Nice pic of my face, not a great view of the hat. 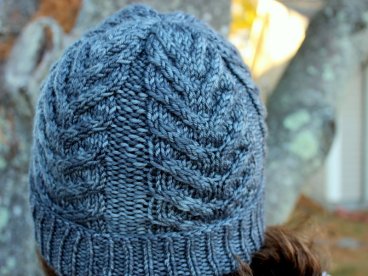 I busted this project out in just 5 days. FIVE DAYS, WOOT! Then it took forever to dry, so it arrived well past my Dad’s birthday, but still… I made the effort? The pattern is the free Antler Hat by TinCanKnits and it’s a really fun, zippy little project. I knit it in the Madelinetosh Vintage called for and absolutely, 100% love that yarn. It’s a dense, tightly-twisted worsted weight superwash Merino with a nice, smooth hand that is perfect for cables (though it takes a while to dry).

Tidy hat crowns make me unabashedly happy, blurriness and all.

I knit the adult small, but be warned that the cables make the hat quite snug. Anyone with a head bigger than my 20.5″ one will likely prefer the large. Also, if you’re aiming to wear it slouchy style, you’ll want a larger size and to knit an extra couple of repeats. This size only looks good worn as a beanie with a folded brim, otherwise it’s an awkward length. Knit as written, highly recommended.

Love this crown, too.

And next, I finished my Norby hat, designed by Gudrun Johnston. I’m really pleased with the way the colors worked out, despite my prior indecision. I think repeating the final gradient color throughout the crown of the hat was the most harmonious way to go, and I really love how well this hat coordinates with my Kelp-y Kelpie shawl. In order to add the colorful garter ridges, I had to add a plain knit row into each pattern repeat before the first purl row. This allowed the contrast color to show up properly. This probably lengthened my hat a bit. I had also modified the width to remove one pattern repeat, as it was far too big for my head otherwise. As it is, it’s so lightweight in the woolen-spun Loft yarn that it feels like it could slip right off my head, so I’m glad I made it more snug.

I wasn’t sure I would add the tassels, a friend of mine basically said they make the hat look like a sleeping cap, but I admit I’m rather fond of them. They were pretty easy/fun to make, too. There is a decent photo tutorial in the pattern, but I took some pics of my own, as well.

Securing the tassels to the inside of the hat was a bit of a crapshoot, I’m not sure there’s an easy way to explain what I did but it was basically something like “thread the multiple ends of each tassel strand into the fabric of the hat on the inside, then knot them together”. Not neat or tidy, but it did the trick.

I love these hats, tassels and all. Have you made any tasseled accessories?