Getting my second blog post of the month in just under the wire, 30 days after the first one! Never mind that I’ve been writing blog posts in my head each week, I have to actually commit them to the page for them to mean anything. Here’s a mish-mash of Things That Are Happening Lately, including a sale, FOs, and a WIP!

Remember Sweet Sheep Body Shoppe? You haven’t heard much from me about it lately (I really need to outsource marketing) but we’re still creating lovely, lanolin-rich lotion bars and lip balms over here! I’m currently running a sale of 15% off a purchase of $15 or more through December 7th. These moisturizers make great holiday gifts and work really well on dry, chapped winter hands.

GUYS OMG LOOK I FINISHED THINGS AND THEY ARE FABULOUS. 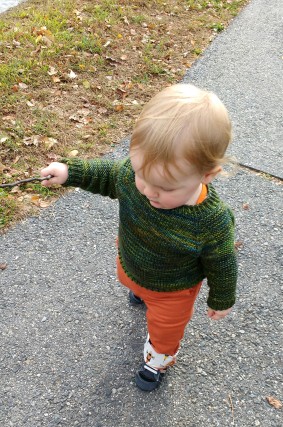 This is the Flax pattern, designed by Tin Can Knits, and it fits him perfectly. I knit the 2-4 year size on smaller needles with slightly tighter gauge and it worked out well for my son, who is in the 95th percentile for height and 91st for weight at 17 months old. I provide some measurements on my project page. I used Malabrigo Rios and this knit was totally enjoyable, I’m even considering making an adult-sized one for the Fiasco (but don’t tell him, he’s still holding his breath for more socks). 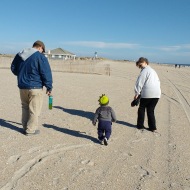 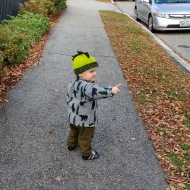 This is the Roar, A Dinosaur Hat pattern by Kate Oates and it’s already been on lots of adventures, including numerous walks around the neighborhood and on the beach with Nanny and Poppy over our Thanksgiving visit. Those spikes were a tiny pain-in-the-tuckus to sew on because I hate finishing but I’m happy with all but one of them and I’m probably the only person who will ever really notice the messed up one. Again, I used Malabrigo Rios at a slightly tighter gauge and I think I knit the child size because my kiddo has a 19.5″ head. 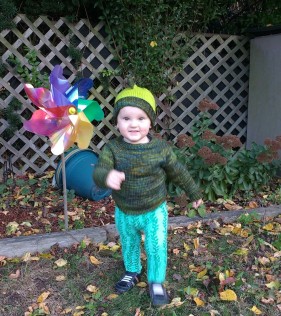 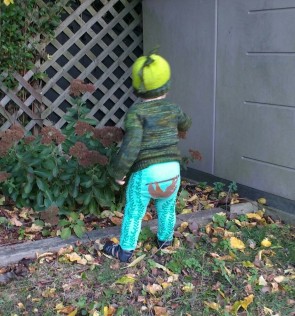 Both coordinating FOs together, with bonus sloth butt! 😀 I’m really happy with both of these projects and still have enough yarn leftover from the 3 dark green and 1 bright green skeins to make matching mittens and maybe even a cowl or neckwarmer of some sort. I love it when that happens! Does anyone have a suggestion for a toddler-sized neckwarmer? I feel like I’ve never really seen a little kid wear one before.

I have since begun three new projects, all intended as gifts, which I don’t appear to have listed in Ravelry yet (who am I even?!?!) so I’ll blog in more detail about them later, but this one is my current favorite: 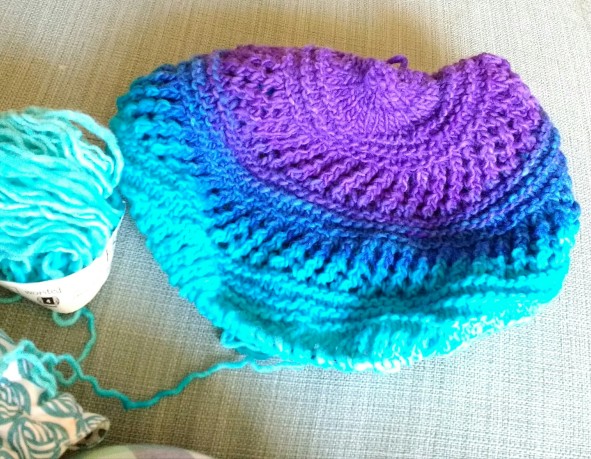 Those colors, though, am I right?!?!?! The yarn is Freia Handpaints Ombre Worsted in the Blue Velvet colorway and it’s ridiculously pretty stuff. The yarn is a single-ply wool, and by feel it’s likely not Merino (or definitely not 100% Merino) as it has a bit more body and bite, not quite as much fluffiness. I’d describe it as a “sturdy” yarn and I imagine it would make really excellent mittens or garments that receive a lot of wear. I’ll reveal the pattern and an FO pic after it’s been gifted. (Just building suspense for next time!) I haven’t done a ton of gift knitting over the past couple of years and it feels really good to be planning presents for people again.

Two FO Friday posts in a row?! I think it’s fair to say that I’m on a roll, especially because this post contains two FOs. The speediness of hat knitting is one of my favorite things.

Nice pic of my face, not a great view of the hat.

I busted this project out in just 5 days. FIVE DAYS, WOOT! Then it took forever to dry, so it arrived well past my Dad’s birthday, but still… I made the effort? The pattern is the free Antler Hat by TinCanKnits and it’s a really fun, zippy little project. I knit it in the Madelinetosh Vintage called for and absolutely, 100% love that yarn. It’s a dense, tightly-twisted worsted weight superwash Merino with a nice, smooth hand that is perfect for cables (though it takes a while to dry). 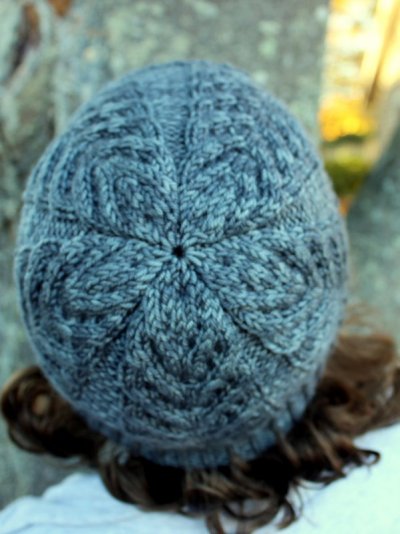 Tidy hat crowns make me unabashedly happy, blurriness and all.

I knit the adult small, but be warned that the cables make the hat quite snug. Anyone with a head bigger than my 20.5″ one will likely prefer the large. Also, if you’re aiming to wear it slouchy style, you’ll want a larger size and to knit an extra couple of repeats. This size only looks good worn as a beanie with a folded brim, otherwise it’s an awkward length. Knit as written, highly recommended.

Love this crown, too.

And next, I finished my Norby hat, designed by Gudrun Johnston. I’m really pleased with the way the colors worked out, despite my prior indecision. I think repeating the final gradient color throughout the crown of the hat was the most harmonious way to go, and I really love how well this hat coordinates with my Kelp-y Kelpie shawl. In order to add the colorful garter ridges, I had to add a plain knit row into each pattern repeat before the first purl row. This allowed the contrast color to show up properly. This probably lengthened my hat a bit. I had also modified the width to remove one pattern repeat, as it was far too big for my head otherwise. As it is, it’s so lightweight in the woolen-spun Loft yarn that it feels like it could slip right off my head, so I’m glad I made it more snug.

I wasn’t sure I would add the tassels, a friend of mine basically said they make the hat look like a sleeping cap, but I admit I’m rather fond of them. They were pretty easy/fun to make, too. There is a decent photo tutorial in the pattern, but I took some pics of my own, as well.

Securing the tassels to the inside of the hat was a bit of a crapshoot, I’m not sure there’s an easy way to explain what I did but it was basically something like “thread the multiple ends of each tassel strand into the fabric of the hat on the inside, then knot them together”. Not neat or tidy, but it did the trick.

I love these hats, tassels and all. Have you made any tasseled accessories?