I’ve been making some progress on some long-term purple projects! First up, I finally finished spinning this yarn:

This is Polwarth wool from Woolgatherings. It has been on the spindle for over a year. I’m not sure why it took so long, really, but I didn’t love spinning it. I’m not sure if the fiber was a little compacted or if it was a bad match with my Golding spindle (too heavy?) but I had quite a bit of trouble getting consistent drafting and there was a lot of breaking going on. That said, I really love the finished yarn. 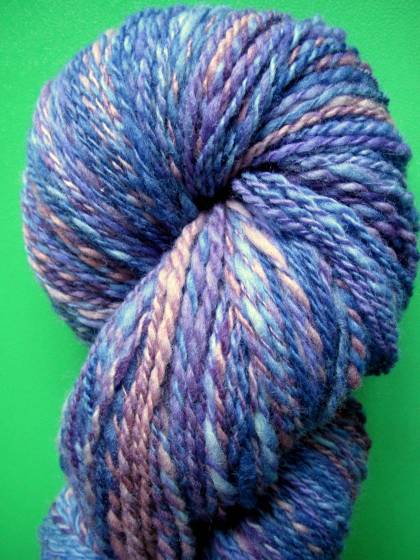 It fluffed and plumped up so much after washing! I split the top in two and spun singles of roughly equal length but gave no real thought to color progressions or trying to match anything up. I spun randomly, plied randomly, and the resulting skein (~284 yards of DK-ish weight) has all sorts of fun color effects. It’ll be neat to see how it knits up.

I’ve also made progress with a completely different (and even older) purple thing! This is my Zombie Shawl and after two years on the needles it’s so close to being done. I am now at the point where I have to pick up stitches around the entire shawl perimeter and do a picot bindoff. I’m fooling myself that I will finish this tonight. There are only a couple of ‘steps’ left but honestly, those steps will probably take hours. It’ll be pretty awesome when it’s done, though!

What’s the oldest WIP you have on the needles?