Friends, I have been in a knitting-blogging-creative rut. I finished the hat I will show you below over 2 weeks ago, and am just now getting a chance to blog about it. All my other knitting feels ‘stuck’ for one reason or another. I seem to have lost my crafting mojo and so have been majorly procrastinating the following:

There are things I want to do, and the impulses to do them are there, but by the time I get home from work, I would just rather curl up on the couch and read or watch TV or sleep. This is not normal for me. Prior to pregnancy, that sort of blatant inactivity wouldn’t happen before 10 pm, and TV-watching was ALWAYS accompanied by crafting. Now it’s happening at 7 pm and I’m feeling too physically tired to do anything crafty, so I’m losing all of my productive evening hours, and going to bed early to boot. I’m just going to go ahead and blame the fetus, but still. I feel like I’m wasting away my last few child-free months of crafting time!

Anywho, onto the hat. 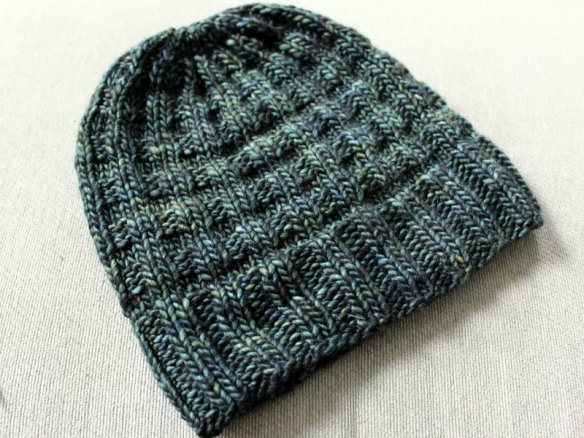 I started this simple, waffle-stitch hat when my coworker announced that he was moving on to bigger and better things. And since he was my science buddy at work, he got a hat. I used Malabrigo Mecha in Vaa, one of my favorite thicker-weight yarns for gift knitting (the other is Malabrigo Chunky). Mecha is a single-ply, superwash Merino wool that is (in my opinion) thinner than the bulky weight  at which it’s listed (and definitely thinner than Mal Chunky). I cast on 72 stitches and used size 9 needles, which gave me a nice tension and a perfect size, and the hat took me about . 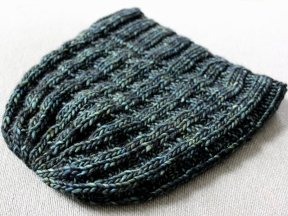 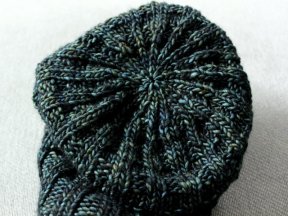 I’m particularly enamored with the way the decreases worked out. Since I couldn’t be bothered to write down what I did, I will probably never be able to replicate it, but I know that I decreased later than I typically would and more often per round in order to get a very fast, concentric-looking decrease.

And that’s all I’ve accomplished lately! My Fidra hat is nearly there, though (just one pom-pom away…) and I’m hoping I can find that swift piece soon so I can wind yarn more easily and get moving on some other projects I have in mind.

What do you do when you’ve lost your crafting mojo? How do you get your groove back?