That is admittedly a really dramatic title for a post that is a straightforward progress update: I’ve reached the part of my Rhinebeck sweater where I divide the back of the cardigan from the fronts for the armholes!

I was super excited about reaching this point since it meant the waist decreases were over and it felt like something exciting would happen… but after decreasing at each edge for a few rows, this part is basically just going to involve 10 more inches of the same fabric I was already knitting. 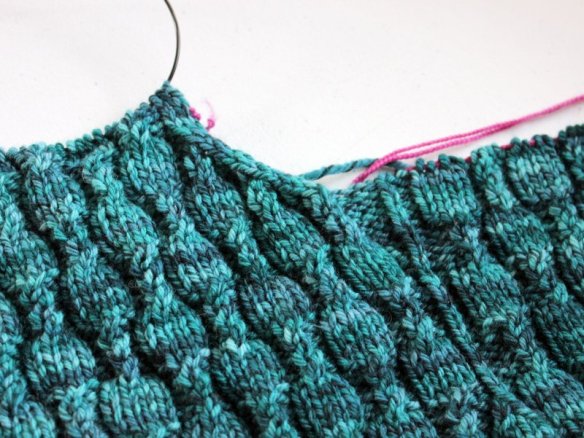 I modified the pattern slightly so that there are 98 sts in the back and 56 sts in each front (instead of 100 and 55) because I liked the way the decreases lined up with the patterning better. What I’m finding really interesting about sweater knitting is that yes, it can be complicated to choose a size and make alterations, but once you do that it’s no more complicated (or less repetitive) than a basic scarf for much of the knitting time. There are certainly fiddly bits but they are few and far between and for the most part, sweater fabric is pretty mindless to produce. Who knew? Andi of Untangling Knots has a couple of great posts about knitting sweaters here and here that I think are helpful for newbies. 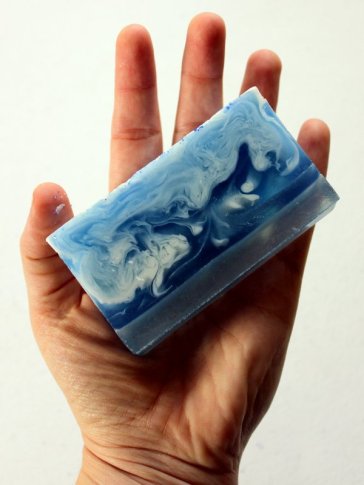 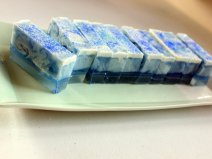 In other news, I made some more soap! This is a slightly different variation on the aloe vera and goat milk Ocean Mist soap that I had my shop previously, as I tried a new pouring/swirling technique (read: the temperatures didn’t work out as I had expected so I improvised) and I rather like how the soap came out. The fragrance is a great blend of Sea Moss (floral, clean, gentle) and Down by the Bay (bright, astringent, salty) that I think is really refreshing in the shower and is apparently unisex, as the Fiasco has already claimed one as his own. I also restocked several bars of Lavender-scented sheep-shaped goat milk soap, if you were waiting on those.

I’m working on my prep plan for the Indie Untangled trunk show in less than 3 weeks (THREE WEEKS OMG) and I’m trying to decide which lotion bar or sheep-shaped soaps scents I need to have in stock. Are any of my lovely readers planning to go to the show? Any special requests of scents you’d like me to be sure to bring? I hope I get to meet some of you in person! Here’s a link to the event page on Facebook, if you want to share with your friends.

And man, less than three weeks? I better keep knitting!