The RI Fiber Festival and Craft Fair was this past weekend and it was a lovely time! The weather held out (chilly but no rain) and there were more vendors present than in previous years. Even though we didn’t have time to prep as much as we would’ve liked, Sweet Sheep had a pretty great show, thanks to everyone who stopped by!

The Fiasco, doing his thing.

There were sheep being shorn and fuzzy bunnies to admire (but not touch, sadly).

I can’t tell you how badly I wanted to squish my face into those baby bunnies… *ahem* Anyhow, I made it out of the festival with only two purchases, which showed some serious restraint on my part.

New to the show this year (I believe, unless I missed her last year) was Amanda from Classy Squid Fiber Co. I had just recently purchased a batt from her Etsy shop but still couldn’t resist the brightly-dyed braid of Polwarth in the Snow Cabbages colorway #noregrets. And I knew as soon as I touched the pretty pale blue gradient of Superwash Merino/Cashmere/Nylon in Chrystee’s booth (Play At Life Fiber Arts) that it was coming home with me. Concrete Sky is going to be the next thing on my wheel, for sure. SO SOFT OMG.

This wasn’t a festival purchase, but I recently wrote about Knit The Sky and the sky-themed blanket I’ve been inspired to make over Hatchling’s first year of life. I debated yarn choices for a while until I remembered that O-Wool sells gorgeous superwash fingering weight yarn at a great price, and I already had two grey skeins stashed that would be perfect for cloudy days. Snagging a skein of the white, yellow, pale blue, and dark blue to round out the sky possibilities was a no-brainer. I appreciate all the suggestions on my previous post of how to go about knitting this blanket. I’m feeling anti-mitered squares at the moment since I’ve had a mitered square blanket on the needles for years and I feel weird about starting more than one of those monsters at a time. Audry had a helpful suggestion of coloring in squares on graph paper to remember what days each individual square represented so I could join them appropriately, which was a concern of mine. I think I’ll do a little swatching and measuring soon so I can get a sense of whether I want to go with joined squares or stripey garter stitch.

All told, my stash is very happy about its fluffy new members and I’m feeling inspired to get on with new projects!

The RI Wool & Fiber Festival was a great time, despite some chilly, drizzly weather earlier in the day. There was a nice selection of vendors, a (too) yummy bake sale table, and cute sheep being shorn. Not to mention the Ladies of the Rolling Pin (actually not sure what they’re called, but they dance around with sifters, rolling pins, and a giant cupcake… and I’ve seen this more than once, so I know it isn’t a hallucination!).

My Fiasco, expertly manning the booth.

We had a great time vending and met some lovely artisans. I kept my purchases to a minimum but after sitting next to them all day, I could not resist taking home a few ounces of colorful mohair locks and a gorgeous, handwoven scarf from the Yarn Crafters booth.

After an incredibly long workweek, the early start, and the busy day, the Fiasco and I collapsed on the couch around 6pm and fell promptly to sleep. I woke up just long enough to transfer to the bed around 11pm and slept full through to the next day! It was rather glorious. Vending is hard work!

Despite all the running around, I did finally have time to take product photos for the newest Sweet Sheep Body Shoppe lotion bar scent: Chamomile Bergamot. This is a bright, clean, elegant scent with gentle floral and citrus notes. It’s part of the new Tea Time gift/sample set that also includes the refined, smoky Black Tea and herbal, fresh Green Tea scents. I hope you check them out!

Man, am I glad this work week is nearly over. I need the weekend, STAT! Luckily, this Saturday (May 16) is the RI Wool and Fiber Festival at Coggeshall Farm in Bristol, RI. Not only does this mean that I’ll get to see my spinning friends and pet some sheep, but I’ll also be vending my Sweet Sheep Body Shoppe products from 9am – 4pm, so if you’re in the RI/CT/MA area, you should come on over and say hi! Let’s feature a different fragrance this week, shall we? Lemon Cake! 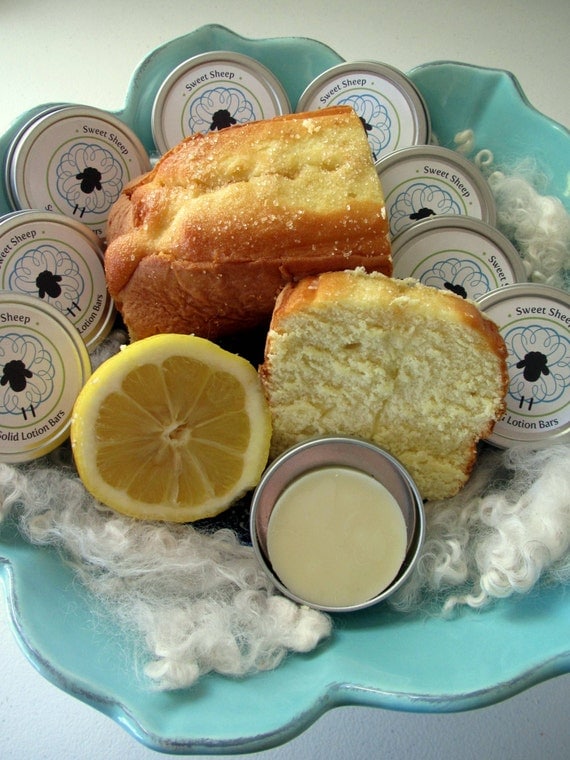 Why I love it: Lemon Cake is by far one of my favorite lotion bar fragrances. It’s delectably sweet, almost buttery in its cake-yness, with a bright, refreshing lemon note on top. It’s pleasing to just about everyone and I love seeing the look of greedy delight in customer’s eyes when they smell it for the first time. The Fiasco even keeps a tin of Lemon Cake on his desk at school, just to sniff from time to time because it makes him happy (he doesn’t really use lotion). It’s that good.

What it pairs well with: I include Lemon Cake in my Coffeehouse Specials gift set, which also includes Cinnamon Chai (warm and spicy) and Turkish Mocha (coffeehouse delight), two other deliciously dessert-like scents. If you wanted to create your own mix pack, I’d suggest pairing it with Kumquat  (tangy and bright) or Honey Beeswax (rich and warm) to play off the summery, citrus notes. 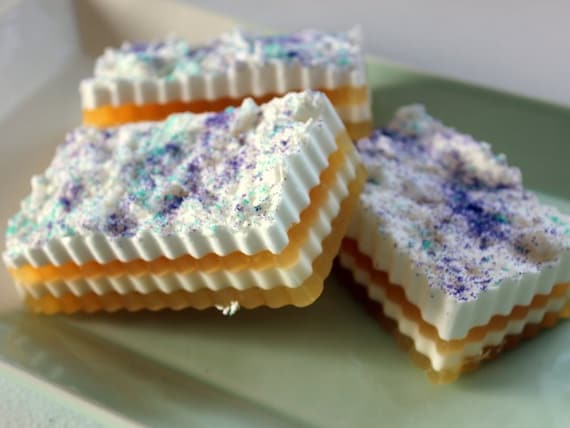 And of course, now you can get the same Lemon Cake fragrance mixed with Cream Cheese Frosting in my new, handmade Frosted Lemon Cake honey base soap!

Hope to see you all at the fiber festival tomorrow. If you do come, let me know that you follow this blog and I’ll give you 10% off your order! Happy Friday!