We’ve been working ’round the clock over here to prepare for a big event this weekend where Sweet Sheep will be vending. We did this marketplace last year, and it was pretty amazing. And the year before, I attended the classes, which were really great. I’m talking about Knitting Weekend, part of the Trad Arts Studio programming at Old Slater Mill in Pawtucket, RI.

And we really have been going out of our minds making enough lotions, lip balms, and sheep-shaped soaps to sell at the two-day event. Last year we underestimated what we needed, hopefully this year we’ve overestimated! Major props to the Fiasco, who has been doing much of the production while I’ve been working crazy deadlines and wrangling the resident Hatchling. (Turns out, kids really suck up all your usual side-business time!)

Bonus: if you come to the marketplace on Sunday, you’ll get to meet the little guy! It’s crazy to think that at the last show, I was pregnant. 0_O I’m much happier with my buddy on the outside, even if he is teething at the moment and preventing me from sleeping more than 2 hours in a row at night. (#teetharetheworst) 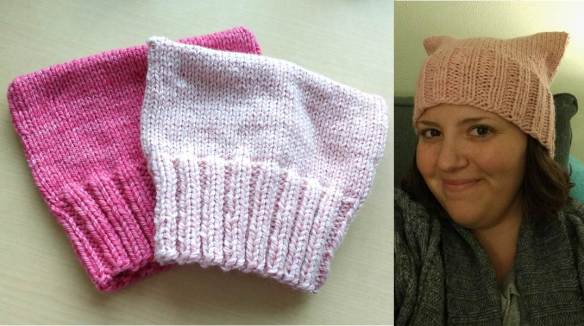 In other news, my pussyhats have left the building. It turned out that one of my coworkers was heading to the march in D.C. with her daughter, which is pretty awesome. I was happy to donate hats to the cause but I’m even happier that I know the awesome ladies who will be wearing them. I used the KitKat pattern by Andre Sue for mine (I much prefer to work in the round). The hot pink hat is in Malabrigo Chunky (colorway Cactus Flower) on size 10 needles with a 68 st cast on, my old standard for a quick chunky hat. The pale pink version is in a new-to-me yarn: Blue Sky Fibres Woolstok in Quartz Crystal, that I picked up at The Mermaid’s Purl in Wickford (#shoplocal). For this second hat, I held the yarn double and used size 9 needles and a 72 st cast on. I really liked the yarn, it’s a thin worsted weight 2-ply wool that has a bit of a rustic feel, and lots of energy when knit held double. Both hats fit really well. I recommend doing the little stitch in the middle of the ‘ears’ to make them look more ear-like, as this pattern suggests. I did so after I took the photo of me wearing it and I liked it much better.

March on, sisters, and I hope I see some of you this weekend!