I don’t know if I’m going to keep writing these random list type posts on a weekly basis, but seeing as I have so much to say and no time lately in which to organize my thoughts, you’re getting them all at once, sporadically arranged. 🙂 And I began this post at 11:34 pm, so let’s see if we can publish while it’s still Friday, shall we?

1- I’ve acquired some gorgeous yarn lately. I’ve had my eye on Stray Cat Socks Etsy shop for some time now, but always talked msyelf out of placing an order due to shipping from New Zealand. However, I saw these gorgeous socks on a day when I really needed a pick-me-up, so I caved and ordered the same rainbow colorway (Are We There Yet) and another skein to keep it company on its long voyage (Monavale Rose). Could this packaging be ANY CUTER?!?! 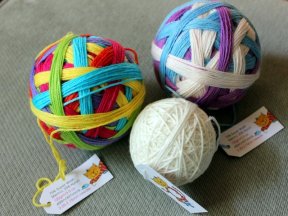 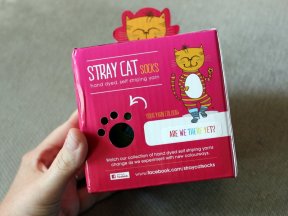 2- I may have also picked up a skein of yarn from a Ravelry destash recently, too. Let’s ignore the fact that Rhinebeck (a.k.a. yarn mecca) is merely weeks away, ok? I couldn’t help myself! It’s a one-of-a-kind, mill end skein of of Blue Moon Fiber Arts Socks That Rock Mediumweight in  blue-green speckled colorway that I instantly fell in love with. (Also, notice that strange reversed logo? Weird!) It looks like it might have been a precursor of one of their new colorways, A Speck of Autumn. It’s destined to be a Sockhead Hat, I think.

This was clearly made for me.

3- I had a rather hellish couple of weeks at work (deadlines, no time, etc.) but I managed to escape early this afternoon and stole a couple of hours of daytime(!) weekday(!) knitting at a little bay beach nearby. (My Rhinebeck Sweater ain’t gonna knit itself, amIright?!) 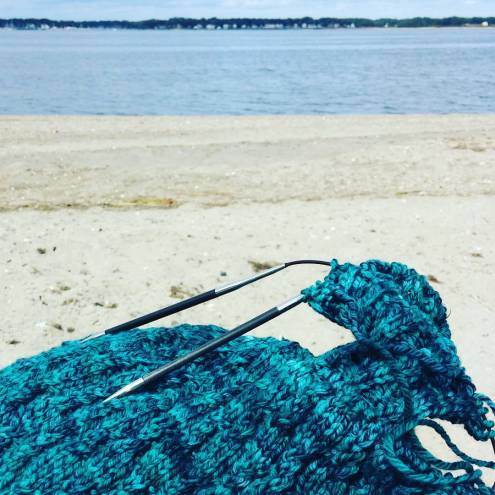 Not gonna lie: it was pretty glorious.

I have the hardest time relaxing, sometimes. I was there for maybe an hour and a half in between errands and appointments and I felt like I should’ve been doing something (anything!) else the entire time. Relaxing during daylight hours seemed criminal, somehow. Sad, right? I’m working on it.

4- I just shrink-wrapped 80 bars of sheep-shaped goat milk soap for a special order, and I feel like some kind of heat gun kung-fu master. You’ll have to take my word on this if you’ve never tried it, but shrink-wrapping stuff is weirdly satisfying. 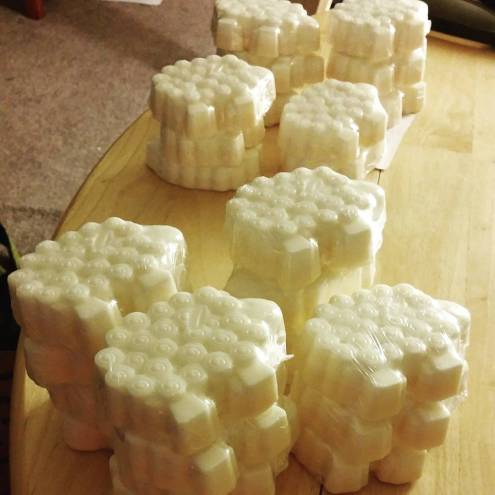 So many sheep soaps!

5- And last but not least, I’m vending at the Fiber Twist & Bead Bash themed weekend of the Coventry Regional Farmer’s Market in Connecticut THIS SUNDAY, Sept. 27th, from 11am – 2pm. Come say hello! The Fiasco and I used to live down the street from it and went as often as we could, it’s a great market. I heard rumors that this might be its last year, which is super sad, but I’m honored to be able to vend there one last time.

And that’s all I got! Looks like I missed Friday by about 15 minutes… oh well. 🙂 Have a great weekend!

I am determined not to let another week go by with just a single, lonely blog post. However, I have not had time to take many photos this week; thus, today will be a list of random things with photos ganked from my Instagram.

1 – I have reached the waist decreases on my Rhinebeck sweater, and I have no idea what to do about them! I am modifying the pattern because I wanted more room in the hips but less room in the bust, so I thought decreasing about 3 inches for the waist and then increasing back out one inch for the bust might work for my measurements… BUT the fabric is an all-over ribbing/cable texture, so I am having trouble figuring out decrease placement that will allow for increasing back to a smaller stitch count than I began with, but still keep the pattern intact. WHY MUST I GET FANCY WITH THESE THINGS, HMMM? 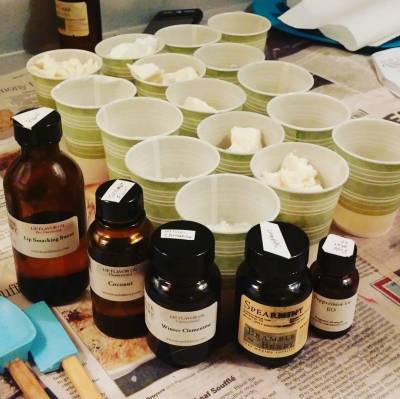 2 – My house has been an absolute mess for the last week or so as I’ve been nonstop making lotion bars and lip balms for a wholesale order and the fast-approaching Squam Art Fair. (September 19th in New Hampshire, will I see you?!) The Fiasco and I will be stickering and shrink-wrapping 150 lip balms tonight while watching The Cider House Rules on Netflix. Is that an exciting Friday night, or what?

3 – I have a very full head of fairly fine texture, wavy-curly hair that can be quite difficult to manage. I’ve been using Deva Curl products for a while now because their more natural, moisturizing, sulfate-free ingredients are supposed to be much better for curly hair and I really do like the shampoo and conditioner. Their styling products are nice, too, but I find they make my hair too ‘gunky’ the next day, and I only shampoo every other day so that’s not ideal. Anyway, they have a training program for stylists that teaches them to cut curly hair while dry so it flatters curly hair’s natural texture. I found one such stylist at a fancy city salon in Providence and I’m going to get a haircut tomorrow. I’ve been so bored with my hair and just generally unhappy with recent haircuts, so this is quite exciting for me. (It’s my blog, and I can naval-gaze if I want to!) Have any curly-headed ladies had luck with such haircuts?

4 – This morning, my Kindle screen tragically and strangely froze… just in the bottom left hand quadrant of screen. WHAT THE HECK AM I SUPPOSED TO DO ABOUT THIS? HOW WILL I LIVE?!?!?! I am quite distressed. How am I supposed to get my John Irving on with a screen like that?! What is happening? What should I do????

5 – This Sunday, my spinner’s guild is hosting a sock-yarn-spinning class taught by Amy King of Spunky Eclectic, who also teaches a Foundations of Spinning class on Craftsy and will be teaching lots of spinning-related classes at Rhinebeck. I am beyond excited about this. I haven’t had a proper spinning session since Tour de Fleece in July, and it’s high time I get back into it. I will be sure to report back with details on the class.

That’s all I have for you this Friday. Happy weekend, everyone!