This week was a total doozy, man. Between feeling sick earlier in the week, a stressful work-from-home snow day, a visit to the dentist, some crazy work stuff going on, and what I’m assuming might be food poisoning (both the Fiasco and I are nauseated and ill this morning)… I’ve had better weeks. Nothing really bad has happened, but it just feels like a whopper. (A lot of people around me have been having crappy weeks, as well.) My energy levels have been super low and I’m just trying to take it easy to avoid getting sick(er). C’mon, immune system!

All that is to say, that I’m really looking forward to a weekend in, where we really don’t have much planned besides maybe a trip into Providence to see a friend. As you can see in the photos above, I’ve been taking my sock mending seriously and putting in some considerable time. For this weekend, I foresee more sock mending, more shawl knitting, lots of reading (I’m on Outlander book 4 now, I can’t stop!), and some spinning. Oh yes, certainly some spinning. 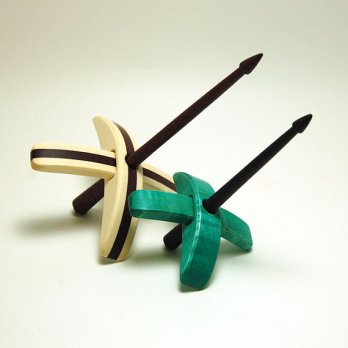 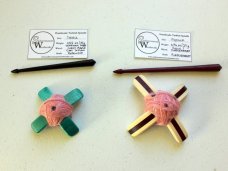 They are the cutest.

I’ve had my eye on Derek’s Turkish spindles (from Subterranean Woodworks) for quite some time. If you peruse photos of some of his work on Ravelry, you’ll notice that his spindles often combine different woods in beautiful striped arms, or use maple dyed in a fun color. I would always just miss his announcements or updates, though, and finally got tired of waiting and asked if I could place a custom order. He was perfectly happy to make whatever I wanted and I figured hey, I’m ordering one, why not get both of the spindles that I admired. So a small-sized turquoise-dyed maple spindle with an East Indian rosewood shaft and a medium-sized holly and purpleheart striped spindle with purpleheart shaft have now joined my collection.

They’re great. I’m partial to the wee one, but I’m learning to flick the larger/heavier one a little better. I’m really finding it fascinating how the same basic style of spindle can differ so much between makers. The SWW spindles both have much thicker arms and shafts than my Jenkins and Enid Ashcroft Turks, which affect flicking speed and the ease of winding on (a little slower and a little easier, respectively, I’m finding). I’m spinning up half an ounce of Louet merino/silk on each to continue my somewhat neglected spindle experiment for which I’m spinning and plying the same fiber on multiple spindles to try to discern any differences in the ‘default’ yarn I produce when using each tool. This inquiry is clearly a good use of my scientific skills, yes?

What are your plans for the weekend? Hope they’re as relaxing or as exciting as you’d like them to be!

6 thoughts on “A Weekend In”