I can’t even stand all the adorable-ness that I’m about to post. First, I went totally pom-pom crazy yesterday:

A veritable pile of pom-pom ornaments.

Turns out pom-poms are kind of addicting to make. I now want to knit myself a big chunky hat with a gigantic pom-pom on top. I probably will.

Next, I finished a tiny baby vest that made the Fiasco actually say “it makes me wish we had a little one to put inside it!”: 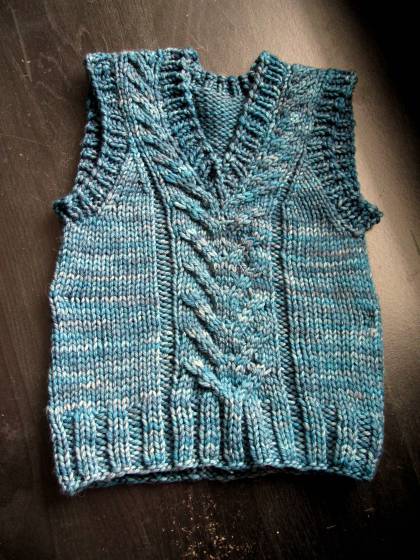 This pattren, Dyvest, is one of the patterns eligble for the Indie Design #Giftalong that is going strong through the end of the month. (There is still time to sign up and join in with a quick knit or two! My superbulky Syrinx Shells cowl or the small size of my Dissipative cowl would be fast projects and are both eligible.) The Dyvest designer, Anjali M, has been super helpful answering my gauge/sizing questions, which I really appreciated. Having never knit a garment like this before I was/am a bit worried about fit but I think it will be ok. My little nephew measures about 19″ around the chest and this vest is 19″ around unstretched, and the fabric is plenty stretchy. A little more ease might have been better so he could wear it longer, but it also was looking really big on the needles already so I didn’t want something that would totally hang off of him right now, either. I modified the pattern slightly so that the ribbing would line up with the cable pattern of the vest, it was offset as written and that is one of my knitting OCD triggers. Overall it’s a nice pattern and I’ve cast on a matching one for his older brother. I can not wait to get pics of the two of them wearing them.

The pattern is Miscreant by Hunter Hammersen. I love the ruffly eyelet so much! After the first few rows the cuffs are just a simple slipped stitch rib pattern so they go quickly. I couldn’t find my size 4 needles so ran out and bought some Karbonz needles, I really like them! I’m usually anti-metal because they are too heavy and cold, I much prefer wood or bamboo, but these needles feel like a nice balance between the two. Lightweight and warm to the touch but with substantial and decently-pointy metal tips.

Ok, that’s enough cuteness from me for now. Must keep knitting xmas gifts!

4 thoughts on “The Cuteness!”