Every time I knit with my own handspun yarn I feel like a fiber genius/mad scientist. After all that scheming, preparing, imagining, spinning, spinning, spinning, plying (sometimes), finishing, skeining, washing, and winding… you finally get to cast on. And then– Eureka! It lives!

I’ve been spinning for almost 2 years now and I’m still consistently surprised when my handspun doesn’t 1) instantly fall apart and 2) look like crap when knit into fabric. Even this yarn, which was rather unintentionally thick-and-thin, is looking really good knit up. But it did need a bit of coaxing. 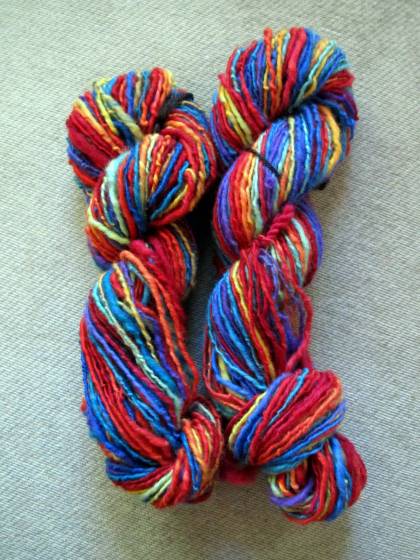 This was the yarn that I finished during Spinzilla in October. I wanted to try to make a fat singles yarn. The tough part about singles yarn is getting the twist right. Since you aren’t plying the single with another single to balance the twist out, you have to be very careful not to put in too much twist to begin with. You also can’t put in too little or your yarn will not be strong enough and it will fall apart. Dilemma, dilemma!

What I did was spin my singles and finish the skeins by alternating between soaking/agitating in HOT HOT HOT water and ice cold water. I plunged the skeins back and forth 3 times, roughing them up a bit in between. This made the fibers felt a little bit which helps to hold the yarn together. However, my skeins felt dense and ropey and they had far too much twist. So I wound them into balls and sent them back through the spinning wheel, spinning in the opposite direction to remove extra twist. You can see the difference in the photo above: after removing twist the yarn got much softer, lighter, and fluffier but is still plenty strong to knit with. (It almost feels a bit like Malabrigo!)

As I said before, genius! Mwahahahahahahaha! I’m excited to try spinning more singles yarns, now that I know they won’t be horrible when finished. What’s your favorite spinning trick?