After an intense few months of working on a manuscript revision in my spare moments (which I finally finished!), I had an entire Sunday to spend with the Fiasco doing whatever we pleased. This meant that I woke up slowly and watched my Three Bags Full DVD and caught up on my knitting– entirely guilt-free! I literally cannot remember the last time I had such leisure time and man, it felt good. Here are a few of the results of my relaxing morning. 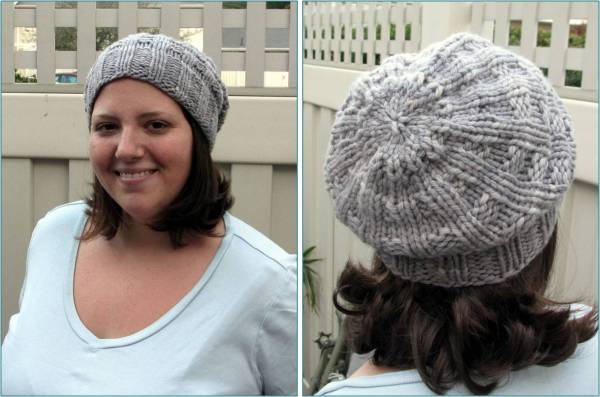 First up is a chunky, waffle knit slouch hat that I absolutely adore. It’s a design of my own knit in Malabrigo Chunky in the colorway Pearl. I very badly want to keep it for myself but it’s destined to be gifted. Have no fear, though, I have another skein waiting to become one for a final design sample… and maybe even another skein to become one for me. Good thing chunky hats are quick!

Also quick is pretty much anything knit with Malabrigo Rasta. I freakin’ love this yarn, truly. This cowl (False Creek by Tin Can Knits) took me exactly one day to make. The pattern is perfect and lovely, I knit it exactly as written. This is also the prettiest skein of this colorway (Zarzamora) I’ve ever seen and if I find another I will be snatching it up in a heartbeat. I have a real weakness for multicolored-overdyed-with-neutral type colorways.

It felt good to get a few quick projects finished up with only a few days left for Malabrigo October Stockpile. I’ve completed 4 hats and 2 cowls so far and still have a hat, a mitt, and a new cowl on the needles.

This cowl is a modified version of Millwater, designed by Beth King and knit in Malabrigo Twist (colorway Damask Rose). It is a simple design that produces a really dramatic look with that big, poofy cable placed off-center. I  modified the pattern since I’m using thicker yarn and larger needles and the recipient is quite small so I wanted it a bit thinner overall. I started this thing three times before I got the proportions down but I think they’re good now. If you’re wondering, that greyish bit near the bottom is my lazy-knitter’s way of doing a provisional cast on (which always seemed unnecessarily  fiddly to me). I learned it from the TECHknitting blog, which is an amazing resource for really useful tips and tricks with great illustrations.

To counteract all that indulgent sitting-around-and-knitting, the Fiasco and I went for walk in the woods later in the afternoon.

Hello, outdoors! Hello, world! I’m excited to be back. Keep your fingers crossed that my paper is accepted so I never have to write those particular pages about horseshoe crab spawning again. I’ve been writing and re-writing the same material since 2009, essentially. Siiiiigh…science! It’s certainly rigorous.

Hope you all had relaxing and recharging weekends of your own!

4 thoughts on “Winding Down”