I have a fun new sort-of-WIP to show you: 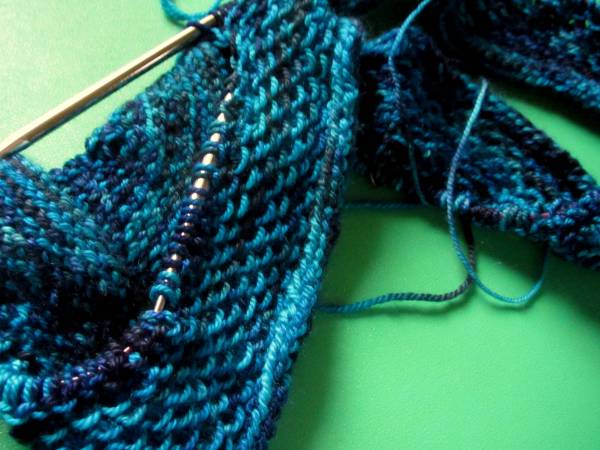 That is the beginning of a Honey Cowl, a free pattern from Madelinetosh, knit in The Verdant Gryphon Bugga. I can definitely see why this pattern has over 12,100 (yeah, you heard that right) projects on Ravelry. Firstly, it’s free, and everyone loves a free pattern. Secondly, the sample is knit in a popular yarn. Last but not least, the stitch pattern is utterly simple but really very striking and a little bit addicting to knit. There’s something about slipped stitch patterning that is just so much fun!

I say it’s a “sort-of-WIP” because it’s not actually mine: I didn’t begin it, those aren’t my needles, and I won’t be finishing it. This is part of what the awesome people at VG have termed “nomadic knitting”. In the VG group on Ravelry, we’ve begun nominating members of the group who have been having a hard time and could use a little bit of knitted love. We choose a project, Gryphon (the owner of VG) generously donates the yarn, and then a whole slew of people volunteer to knit on the project as it gets mailed from place to place until it finally lands on the head/neck/shoulders/hands of the person who  needs it most. The whole nomadic knitting idea is why I love love love Ravelry (and knitters in general) and why I Iove fans of SG/VG/CY in particular. They are some of the nicest bunch of people you will ever meet, actually or virtually.

Now isn’t that sweet? What other examples can you share of the niceness of knitters?

5 thoughts on “Sweet as Honey”