I have so many blog posts to catch up on, but I survived my last week of field sampling, yay! No more boat for me. While it was a fun experience and I enjoyed getting to knit during the downtime on the water, I’m glad it’s over. No more 13 hour days! I’ve missed my me-time.

I have made some nice progress on my Color Affection shawl, though: 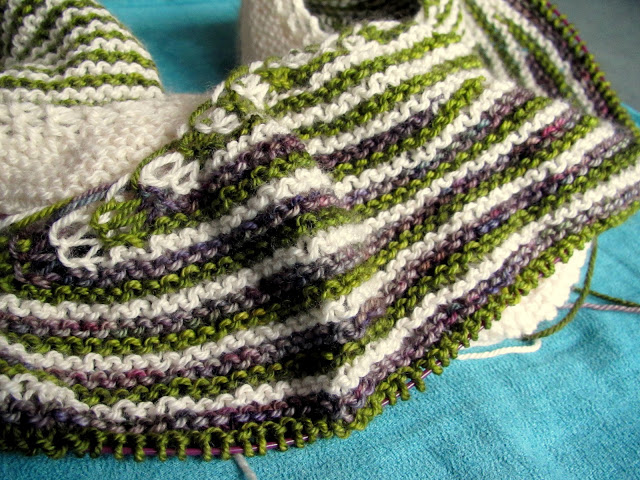 I finally added in the third colorway (SG Bugga, Fierce Snake). Yay! Short rows are fun. Right now they’re still tiny short rows, too, so I feel like I’m making a lot of progress, which is always nice. Soon they’ll get super long, though.

Also, have you guys heard about the whole Ravelympics controversy? Apparently the US Olympics Committee sent a cease-and-desist letter to the Ravelry people for the Ravelympics event they organize online. They said:

“We believe using the name ‘Ravelympics’ for a competition that involves an afghan marathon, scarf  hockey and sweater triathlon, among anothers, tends to denigrate the true nature of the Olympic Games… In a sense, it is disrespectful to our country’s finest athletes and fails to recognize or appreciate their hard work.”

Kind of harsh, but understandable since the name is their trademark. Anyway, knitters have gotten quite up in arms and the committee sent a couple of apology letters… the whole thing seems mightily blown out of proportion. But then again, I don’t participate in the Ravelympics nor do I watch the Olympic games (no cable TV or time for TV anyway) so I suppose it isn’t relevant to me. I just hope the knitters who are getting all angry remember to try not to give the Muggles a bad impression of what the rest of us knitters are really like. Knitters are nice people, don’t be obnoxious! You can read more about it on the New York Times blog and on the Yarn Harlot’s blog as well as the Craftsy blog, and elsewhere, I’m sure, if you google it.

I hope you all have a wonderful weekend. I feel like celebrating my freedom, so I foresee a lot of sunshine, outdoors time, relaxing, spinning, knitting, and perhaps an adventure or two.